Soon The Earth School founded by myself and my dear friend and partner Esme Davis, will be 10 years old!

It is time to take stock.

If we were to sum up the essence of The Earth School in 2 words it would be ‘peace education’. Children who are fully accepted for themselves and supported in their explorations find peace within them and go on to make up a peaceful society.

The proof is in the pudding though and given that the pudding is still baking, we turn our sights to small occurrences that reveal that peace education is at work. The ‘easy to miss’ occurrences that are sometimes sweet (And Oh! There is such sweetness with children) and often times occurrences that appear to be a 1000 miles away from peace, for our children oftentimes, practice making peace by engaging in conflict!

The first time a young child is able to articulate  how she is feeling to a guide, (I am feeling sad now, please sit with me) or an older child takes ownership for his actions while being insightful and gentle with his folly (“I destroyed that because I was feeling jealous. I really should apologize”)

When an entire school community rises up to welcome the youngest entrants to school. By encouraging them with smiles and greetings, keeping an eye out for them and helping them with their belongings.

It is when an older child feels comfortable and safe in our community to celebrate herself on her birthday and writes about her own advances from her first year of life to.her ninth! A birthday celebration becomes a performance piece … a deeply authentic one.

Where an adults love for poetry is supported to become a whole school ‘poem in your pocket day’. Children and parents linger to share poetry with each other.

When a parent body trusts the school enough to support them in their policy of having 2 hours of free play everyday for all children from ages 3 to 12! After a year no child is recommended for Occupational Therapy!

When a child is struggling with reading, writing and arithmetic but is still frequently sought after by peers to help with all manner of drawing, building and problem solving in the environment.

When a child feels the joy of giving a presentation to a peer and with her thumbs up, gestures to an absorbed friend, and whispers to the guide “She is working so nicely!”

This, my friends, is peace education at work!

It always surprises me when I hear people tell me that they dislike poetry. Honestly though I have never heard a child say that. It is usually adults. Somewhere along the long and winding road, poetry quietly exits from our lives…poetry that, I am certain, was a companion to us in our younger years.

A few months ago, we at school,  stumbled across an idea that we fell in love with. It’s called ‘Poem In Your Pocket’ and is hosted by the New York city government and it goes something like this – write your own poem or borrow one from your favourite poet; just make sure to carry a poem in your pocket to share with your friends, family, classmates, and colleagues.

What a wildly delightful idea! Instantly we knew this was something we had to do. Poems were already gifts that we gave each other at school, but here was a chance to extend it to ALL in our community, including our parents.

Now, most of us at school aren’t really into organising events. We prefer the non-fussy, spontaneous approach…people coming together, bringing with them their enthusiasm. It has always worked for us and what a fabulous day ‘Poem In Your Pocket’ turned out to be.

All children and adults at school brought a poem along with them in their pockets. As opportunity arose, usually in quiet moments, we read the poems to each other. Older children who were readers, stepped in to help younger children … little groups of 2’s, 3’s and 4’s spontaneously formed in the playground, during lunch time, in the reading corner, on steps, to read poems together.

The elementary children recited their poems for the school.

When the parents came to pick their children from school, they came with treasure in their pockets. All of us walked out into the street and read to each other. 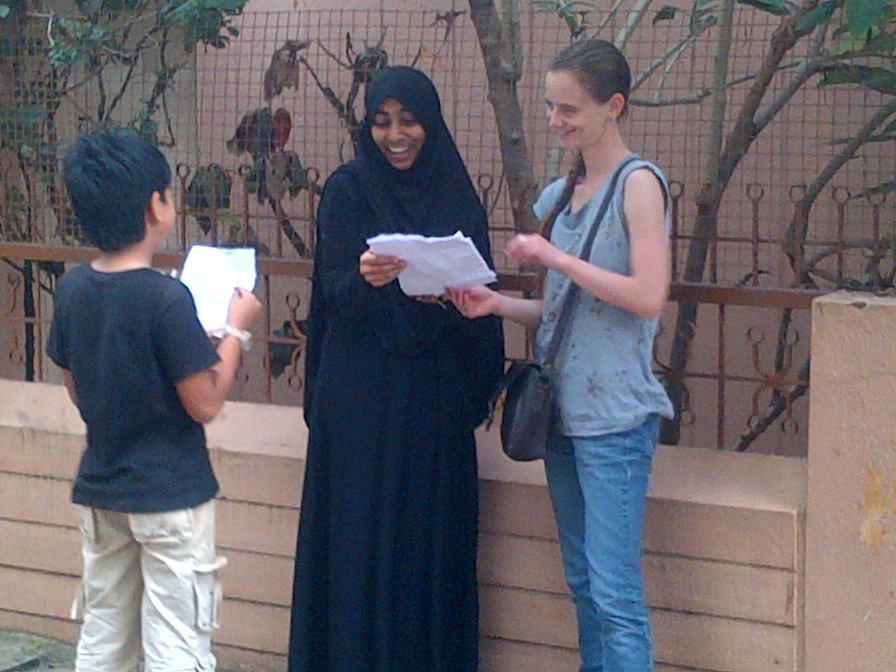 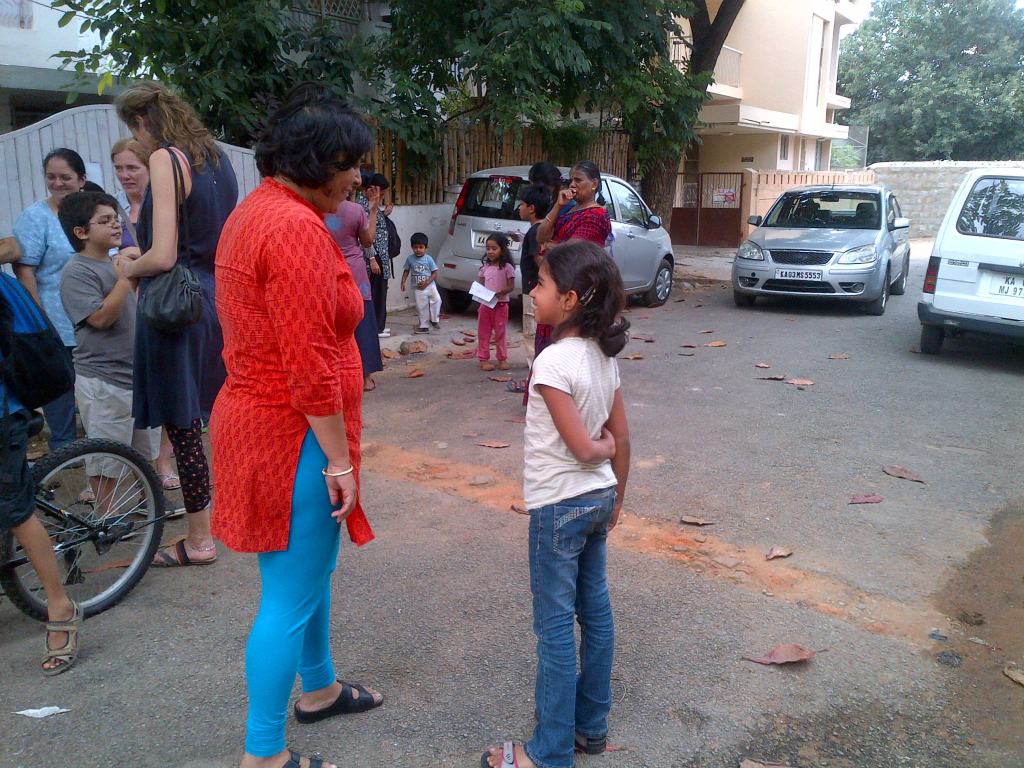 It was a day filled with delight and wonder!

And if you don’t believe me, here’s testament to what it felt like!

Here’s to Opening and Upward
by E. E. Cummings
(poem brought in by one of the parents)
here’s to opening and upward, to leaf and to sap
and to your(in my arms flowering so new)
self whose eyes smell of the sound of rain
and here’s to silent certainly mountains; and to
a disappearing poet of always, snow
and to morning; and to morning’s beautiful friend
twilight(and a first dream called ocean)and
let must or if be damned with whomever’s afraid
down with ought with because with every brain
which thinks it thinks,nor dares to feel(but up
with joy; and up with laughing and drunkenness)
here’s to one undiscoverable guess
of whose mad skill each world of blood is made
(whose fatal songs are moving in the moon

It’s the season for the ‘junglee badam’ tree to shed it’s leaves, once again.

This is the time when we gather the beautiful fallen leaves – red, brown, ochre, burnt orange and russet and string them into all manner of curiosities.

There are pouches secretly carrying a tiny rock and seed or hair wreaths encircling happy heads. Bracelets are fashioned and among the more adventurous – belts, crowns and collars! 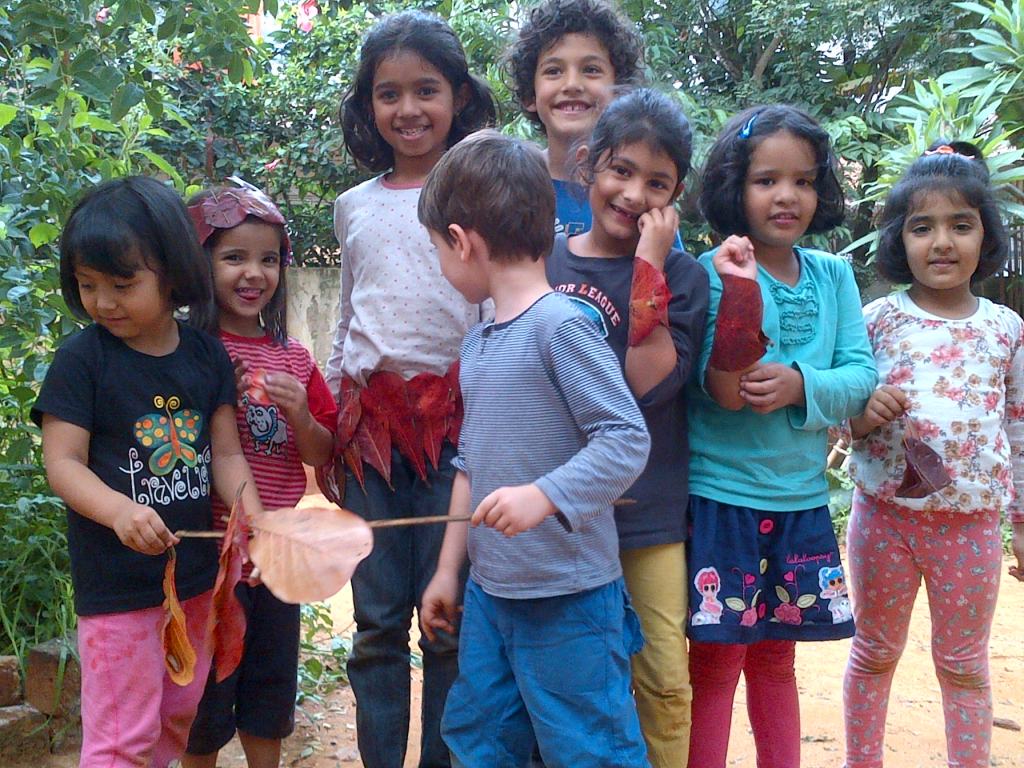 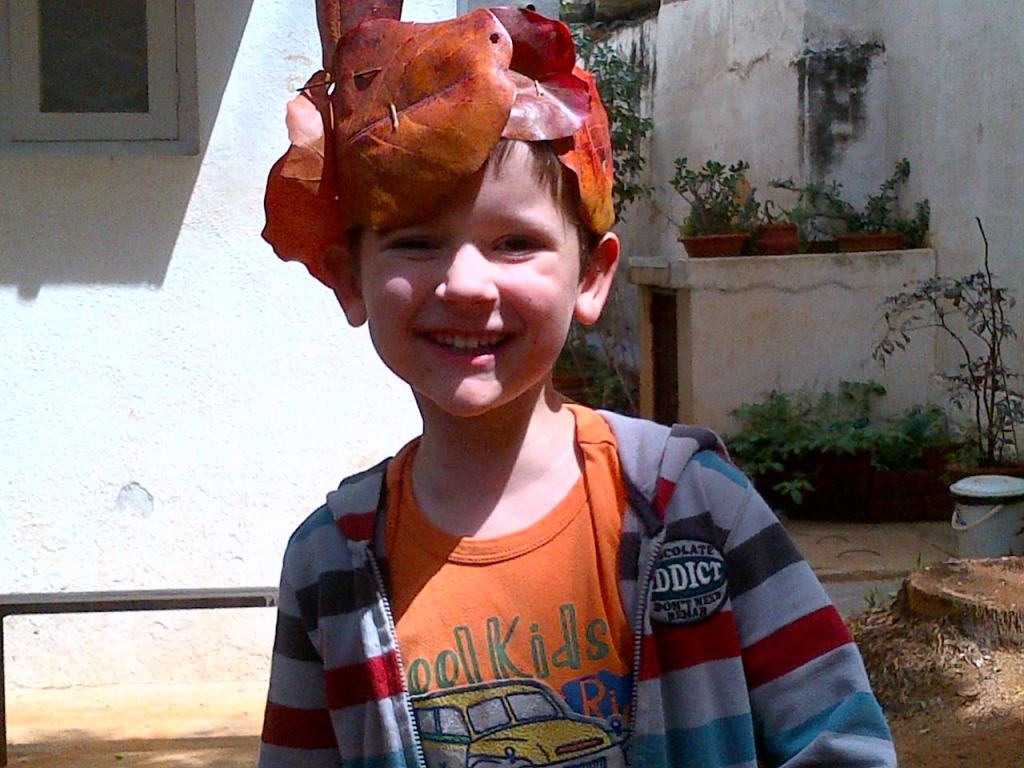 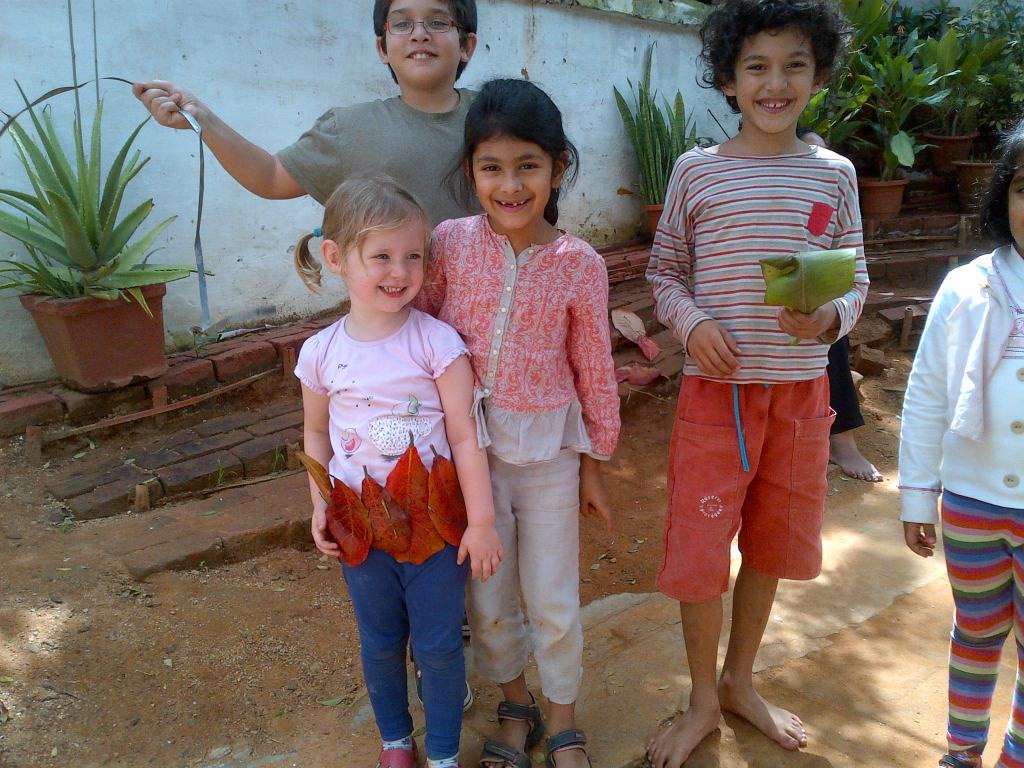 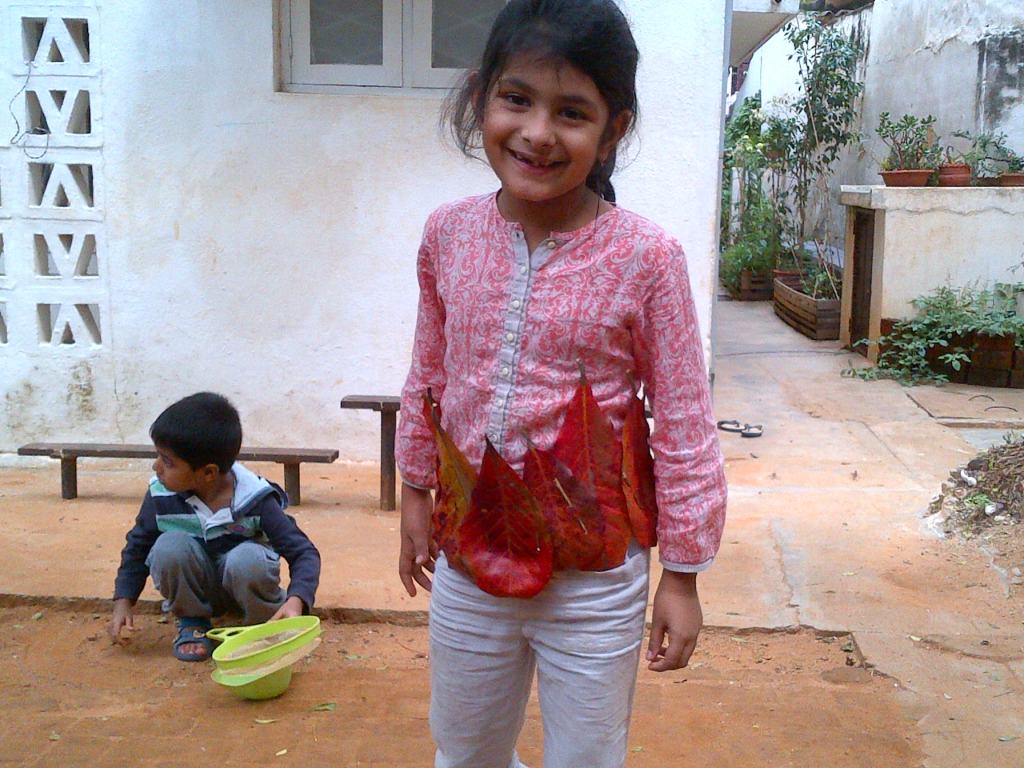 No better than spoons,

And bags full of leaves

Are light as balloons.

I make a great noise

Of rustling all day

But the mountains I raise

Flowing into my arms

And into my face.