Many schools consciously strive to build processes and structures that honour children and their learning. More often than not, however, curriculum is seen as separate. Loftier ideals are the backdrop against which we continue to teach ‘subjects’ or ‘content’.

Montessori education digresses from this oversight. What we present, is as important as how we present.

The curriculum itself embodies the nature of the child. Moreover, it is intuitive and flexible . It can align itself to broader developmental stages of children, as well as, to the infinite variety that comes with each individual. All children forge their own unique path through the curriculum.

The curriculum seeks to answer our children’s deepest questions. It ‘holds’ them as they construct an understanding of themselves, each other and their world.

For the young child the prepared environment, both psychological and physical, is pinnacle. This is the very basis from which children safely explore their physical and social environments. Walking this path with them, is a responsive and steadfast adult.

The curriculum for the young 3 to 6 child, supports their desire for physical independence, an understanding of their immediate experiences and nurtures their stirrings of social life.

It helps the young child gain in skill, which they go on to use as keys to navigate their world and build their very core. Often these keys may seem mundane and all too commonplace to adult eyes but in truth they are indeed golden keys.

As children continue through their elementary years they become well-equipped with the epic tales we love to tell. Tales that satisfy their need to understand the very cosmos around them and find their spot within it. They realise that their story is connected to the very beginnings of time.

They learn that the carbon in their bones, is the carbon of stars and is the same carbon of beetle’s wings. The stories tell them how the gift of their backbone came from will-o-wisps of jelly floating in Cambrian seas. They find fellowship with Lucy and trace their home back to the savannahs of Africa. Each time a child writes a letter or numeral she understands that the marks made, carry a story of merchants, priests and kings.

Within these deep time stories children connect details of themselves and their explorations. They build an ever-widening picture of the universe and over time they see that everything is inter-connected.

The story they ultimately weave is indeed precious and will shape their view of themselves and the world.

The curriculum for the adolescent supports their quest for their place in wider society.

The adolescent works on the land, engages in economic activity and pursues creative activities that express his uniqueness. Importantly, the curriculum takes the adolescent out into society as an authentic contributor.

The curriculum balances their need to assert their individuality with a desire to belong to a community.

Our children’s work is indeed stupendous, inspired work … work that will eventually draw out the very best of being human.

The curriculum that scaffolds our work should be life affirming by aligning itself to the deepest nature of our children.

Anything less is unjustifiable.

This summer break I have been busy with making the ‘missing’ timelines for the elementary environment.

In a Montessori environment, the universe itself is opened up to them through ‘Cosmic Education”. The lietmotif of Cosmic Education is the interdependance of all things, both animate and inanimate, and the gratitude that arises from this understanding.

Looking back in gratitude to all the participants in the drama of cosmic evolution is a subtext that plays constantly in the background of the elementary classroom.

The absence of easy accesibility to a vendor who stocks Montessori timelines in India has in fact been a boon. I have always found my understanding of a work crystallise when I am engaged in making the material myself. Moreover, the connection of the ‘hand’ to the material becomes more evident to the children.

Over the past two weeks rolls of cloth have been examined, measured and cut. An enterprising, and possibly only ‘alteration tailor’ in Bangalore has been befriended. Skeins of silk embroidery floss have been pulled out of dusty drawers and the tape measure has become my constant companion.

First Stop was Khadi Bhandar, where the fabric was purchased. The patient salesman heard our request for unusual measures of cloth. Meters upon meters of black khadi, strange measures of blue, brown, green and red khadi were purchased.

SREEDHAR’S SHOP ON WHEELS AND THE BLANK TIMELINE OF LIFE

I have to admit this is the first time I have come across this particular piece of ingenuity. Sreedhar, an evidently enterprising gentlemen drove up to school in his tailoring shop on wheels!

For the next 6 hours he helped us put together the blank timeline of life. After hearing me wax lyrical about the timeline and explain the idea behind the colour coded strips of cloth, Sreedhar was sufficiently charmed by the idea of making it.

The blank timeline is a blank replica of the timeline of life which charts the evolution of life. Children place pictures, labels and cards of information on pre-historic life and paleogeography onto the blank timeline to construct their own timeline of evolution. By engaging in this work they discover many inter-dependancies – the plants, the animals, the rocks, the oceans, the mountains, even the ice-ages, all interdependant, forming the web of life.

The sliver of a red strip at the end, represents humans. It visually communicates the short time that humans have lived on earth, as compared to all the other players.

The child eventually comes to see herself as the beneficiary of cosmic gifts.

Each year I hear, “Earth has been home to the jellyfish, amoeba, sponges etc etc, so much longer than it has been our home!” or “It is amoeba who are really our ancestors!”

The story goes that the idea of the black timeline came to Montessori when she was residing in India. She had recently had a conversation with a child who had told her that there was nothing that he could learn from someone in the West as India had the oldest real civilisation in the world.

Later she observed workers in the heat and dust of Madras laying black cables in the ground.

From these two things was born the idea of the Long Black Strip – 300 meters of black cloth that represented 3 billion years of our universe’s history. The last few centimeters were coloured white to represent the time that humans have lived on earth.

Today we have reduced the 300 meters to 30 meters, and replaced the white strip with a red one.

Though the timeline does not precisely respresent the current accepted date of 4.5 billion years, it is an attempt to create an impression of the miniscule time that humans have made Earth their home.

The Long Black Strip is a compelling lesson in humility. 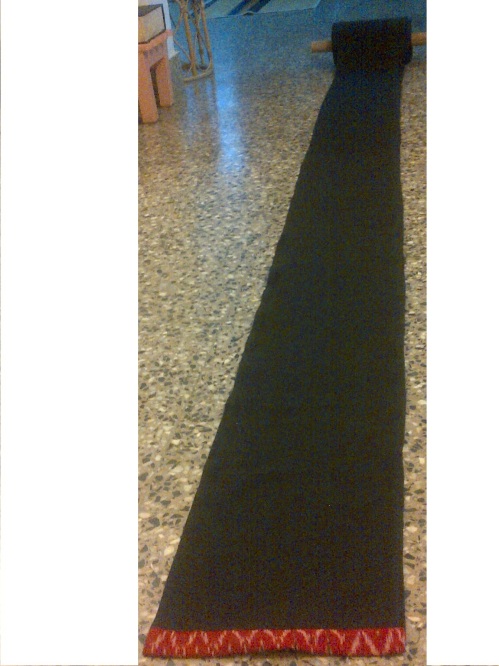 The hand chart creates an impression about the importance of the hand – of work – to humans.

It is a black strip of cloth representing 7 million years of human evolution. Bang in the center is a picture of a hand with a stone tool. There is also a slim red strip right at the end that represents the birth of writing and recorded history.

All throughout the history of humans, it is their ability to work that has helped them survive.

Here echoes a message: be grateful to those of previous generations who have faithfully, lovingly, and expertly done their work in the world so that you may have life and the benefit of their knowledge!

People say that narrow paths are difficult to walk about, yet, once you have narrowed down the whole, the vast and the big, to its least denominator, the narrow path is simple,

thanks to the process of reaching it.

We are a small school.

We have 30 children in total. There are 4 teachers and 3 support staff.

But then there are the benefits of a small school.

Each one of us has a relationship with the other. Every afternoon, we eat together as a community, every birthday is celebrated with the whole school present, every child knows the other. Each adult in school, including the support staff, has a personal equation with every child. We understand their pulse and rhythm.

We will not always be as ‘small’ as we are today, but my hope is that we will always be able to capture the beauty of ‘small’.