Two days ago a boy was busy sliding and counting beads to help him subtract numbers in millions. Each time he borrowed or exchanged a bead, I observed him stare at the subtraction problem on his paper and mutter, mutter, mutter.

He came to me saying, “I think I’m doing this without material … just with my mind”, so I suggested that he put the material away and check.

He brought over his paper. Neat rows of numbers with a precise difference recorded.

The boy had abstracted subtraction!

“I want to do another subtraction problem. A l-o-n-g one in quadrillo’s”

Now, quadrillo happens to be a number name invented by one of the children in class, for a hierarchy after googol (10100).

I asked if he wouldn’t mind starting with a number belonging to the quadrillion hierarchy (1015 ) first and then moving on to one in ‘quadrillo’ and he agreed.

He did two precise subtraction problems. The strips of paper he had used, inspired him to make a flag out of them.

He went outside and found a stick and stuck his subtraction problems, front and back to make a ‘subtraction’ flag.

Incidents similar to this occur in every montessori environment and ours is no different. I can picture the other montessori teachers who are reading this nodding their heads in agreement.

Often I am asked the question if abstraction  really happens so naturally –how and when and indeed if at all, children leave the material behind and work mentally, without being explicitly taught?

To answer how and if at all the child moves from the concrete to the abstract, we need to look at the materials presented to the child.

The montessori materials that children work with are  ‘materialized abstractions‘.

The materials are the concrete forms of an abstract concept.  Through hands-on work with material, the child internalizes the concept or abstraction that it houses.

Working in ‘abstract’occurs as a result of an internalization of the concept embedded in a material, and repetition of many parallel activities that serve as ‘passages to abstraction’.

It isn’t just one long vertical line, but also a horizontal one, where the child discovers the connections between things. For example, the connection between addition and subtraction or addition and multiplication and so on. (mathematics overflows with patterns and the list is endless)

To answer when will a child reach absraction, we must bear in mind that this takes time. It comes after much work and and each child has her own timetable. Rather than push a child, the Montesori guide protects the freedom of each child to reach the abstraction on her own. Aah! to witness the delight expressed at the discovery of a connection!

But most important of all, is to remember that the materials  are not presented with the sole intention of having a child internalize a concept. This is not just a ‘different’ way of ‘‘teaching’. Their purpose is far greater than that … it is one of development. The materials satisfy a need of not just what is still to come but what is NOW! Through active involvement and freedom of choice, the child builds upon her ability to concentrate, self-direct and gain successive levels of independence.

But now I am digressing, let’s go back to the boy we spoke about earlier.

Looking at the paper on which he did the subtraction problems, I was struck by the neatness. There were no strokes and loops showing the borrowing and changing of quantities, like this: 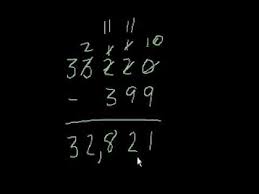 And I remembered my school days.

If I had shown up with subtraction problems completed like the one above, the teacher would have assumed only one thing – that I had copied it from a friend. If it had been on a test, I would have been knee deep in trouble!

The very same thing that we are celebrating in this post, would have  been the source of ridicule and shame.

The boy deciding to convert his work into a flag brought to mind Montessori’s words. In one of her books she spoke about a child being anchored to his age. Though he might be working on something that we would consider beyond his years, when he goes out to play he is just like every other child his age.

The boy may subtract in ‘quadrillo’s’ but in the end he wants a flag! 🙂

Published by The Earth School

The Earth School is a Montessori school that has been serving children since 2009. It is a space where each child is nurtured with equal measure of head and heart; where children as natural learners are honoured, and where community is the driving force that helps the individual reach their potential. View all posts by The Earth School

This site uses Akismet to reduce spam. Learn how your comment data is processed.